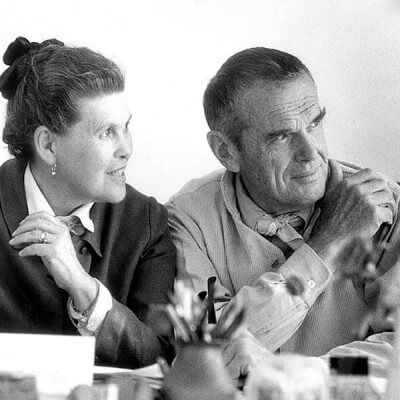 A chair that looked like a potato chip. Another that resembled a "well-used first baseman's mitt." A folding screen that rippled . . .

With a grand sense of adventure, Charles and Ray Eames turned their curiosity and boundless enthusiasm into creations that established them as a truly great husband-and-wife design team.

Their unique synergy led to a whole new look in furniture. Lean and modern. Playful and functional. Sleek, sophisticated, and beautifully simple. That was and is the "Eames look."

That look and their relationship with Herman Miller started with moulded plywood chairs in the late 1940s and includes the world-renowned Eames lounge chair, now in the permanent collection of the Museum of Modern Art in New York.

Charles and Ray achieved their monumental success by approaching each project the same way: Does it interest and intrigue us? Can we make it better? Will we have "serious fun" doing it?

They loved their work, which was a combination of art and science, design and architecture, process and product, style and function. "The details are not details," said Charles. "They make the product."