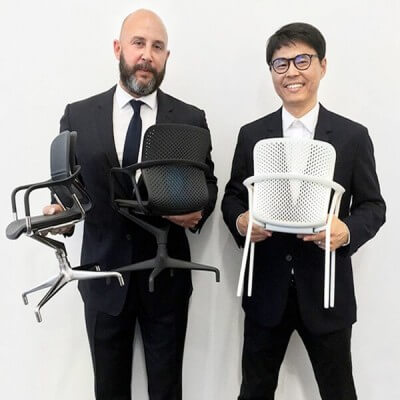 You’ve probably flown, driven, watched, eaten, spoken on, stayed in or sat on a design from forpeople, but you may never have heard of them. That’s because with forpeople, the work always comes before publicity.

The work has covered a range of clients, including Herman Miller since 2009. It’s been a natural partnership, since both companies see things much the same way: the continuous search for new perspectives and insights, brought to life through truly great design, cutting-edge engineering and responsible manufacturing. All with the aim of improving how people work and live every day.

After a short time as Design Director at global branding agency Fitch, Stevens founded forpeople in 2004. It began with just four people. The organisation has grown to over 80 people today. Key among them is Joohee Lee, who joined forpeople in 2012 as Associate Director and worked alongside Stevens on the design of the Keyn Chair Group.

A native of Seoul, South Korea, Lee graduated in Furniture Design at Hongik University before gaining an MA at Design Products in London at the Royal College of Art. He then joined Samsung Design Europe as a Senior Designer, where his work achieved widespread recognition including the IF, Good Design, Red Dot and IDEA Gold awards. At forpeople, Lee has responsibility for design excellence in furniture, consumer electronics and the music industry.